Artesia was of much later establishment than Roswell, the building of the pleasant little city of today beginning with the completion of the railroad in 1898. There are now about 2,000 people in Artesia, and it is coming to be one of the most important cities on the slope. The artesian well is altogether responsible for Artesia, the irrigation ditches from the streams stopping far to the north. Under the artesian wells, some 15,000 acres of orchards and alfalfa are now smiling productively, and the indications are that their area will be steadily increased even though the present promise of a great petroleum field is justified. In 1913 Artesia shipped 711 cars of alfalfa and alfalfa meal.

Artesia is the outlet to the railroad of the rich Penasco Valley, and has grown into a cosmopolitan little city, with electric lights, telephones, a municipal water plant, and many other features found usually in cities of twice its size. The surrounding country above the artesian flow is also being developed by pumpage, and it is a mere matter of time until many thousand acres are reclaimed from the desert.

Hagerman is nearly as old as Roswell, the Turkey Track Ranch headquarters on the Felix River having been an early trading point. The great northern canal extends from Roswell to and through Hagerman, and several thousand acres are irrigated from it, while nearly as much more depend upon the Felix and the artesian wells. Hagerman has a population of about 1,000 and a supporting country population that is as prosperous as any in New Mexico. The little town ships about 1500 cars of alfalfa each year, and has one of the best appointed alfalfa meal mills in the state, telephones and electric lights.

The Mother Church was late coming to Roswell, we may add, although the story thereof will be contributed by more competent hands. The first Mission in Roswell, for example, was in 1898, and it was a struggling one. However, under the consecrated leadership of Fr. Heribert, the elements were gathered into a promising congregation. Before that there was only an occasional visit from priests at Lincoln to renew the covenant. The writer, as a Protestant, cheerfully gives to the Franciscan Fathers the credit for the work of building the church in Roswell and Carlsbad, most of all to Father Heribert, who was in a sense a pioneer, and had to contend with the difficulties existent in a community overwhelmingly Protestant. It is the most cherished recollection of the writer that, as a newspaper man, he was able to help some in the work of the Franciscans and Father Heribert, and also in the establishment and development of the great St. Mary’s Catholic hospital at Roswell, which serves a vast stretch of country.

Having no higher institution of their own for boys, the Franciscans have encouraged, so far as was seemly, the work of the New Mexico Military Institute at Roswell, practically half of whose students are Catholic boys, and from the first there has been the broadest and most intelligent spirit of co-operation between them and the balance of the population, which has contributed much to the exceptional regard and esteem for the Church entertained in channels here that might ordinarily be expected to be hostile or at least indifferent. In this one institution alone, (the Military Institute) there is a common bond that has been recognized by the state, and when the Roswell congregation has grown still further, it may increase in warmth. 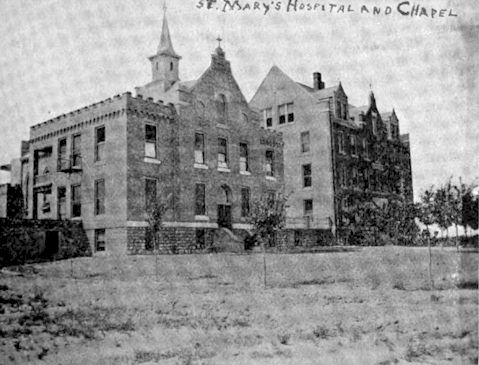 Of the establishment of the Church in Roswell, Hagerman, Artesia and Carlsbad I can add little to that which will be said by others better equipped with the data, but I can for see a wonderfully useful future. Roswell has a superb climate, being similar to, although somewhat colder thin Phoenix, and is certain to be the largest city in the state at no very distant date, and centering the richest agricultural section in arid America. There is a great work here, and it is pleasing to observe that its intelligent continuation is assured in the hands of the Franciscan Fathers and a loyal Catholic people.

For the cuts in the preceding article and for some of the following cuts we are indebted to the Roswell News, the Carlsbad Argus, and to other friends.