In 1617 there were eleven churches in New Mexico the ruins of one of which, that of Pecos, can still be seen a few miles above Glorieta on the Santa Fe main line. This pueblo was once the largest in New Mexico but it was deserted in 1840, and now it’s great house, supposed to have been much larger than the many storied houses of Zuni, is entirely in ruins. The pueblo and church rested upon a natural fortress like elevation a few acres in extent, walled on three sides with the adobe wall of the church protecting the fourth side. Coronado visited it in 1540 and his historian gives a supposedly accurate account of its appearance then. War, famine and pestilence so reduced the population of Pecos that in 1840 only five remained. These, lonesome and discouraged, gathered up their household goods and abandoned it forever, some going to the pueblo of Cochiti and others to Jemez. The Indians tell a very interesting legend2 of the reason for the abandonment in that the whole of the people were under the evil spell of witchcraft. They had forsaken the true way and had gone on the “evil road”. In their anger Those Above so planned that all the wicked ones assembled in the underground Kiva to have a contest “in medicine making” with the five faithful ones. Then, after the evil ones had revealed openly their wickedness the thunder of the gods was heard, the ladder of the Kiva was violently jerked up so that no one could escape and water began to pour down through the hatchway until all the evil ones were drowned. “But all around the five the water stood back like a wall, and they were on dry ground.” The Franciscan Missions of the South West were, perhaps, the first manual training schools established in America. The whole principle and much of the best practice of the most progressive of our much vaunted manual training schools were incorporated in the Mission system. Benavides in 1630 tells us of New Mexico Indians learning “all the crafts and trades for human use, such as tailors, shoemakers, carpenters, blacksmiths, and the rest, in which they are already very dexterous.” At Isleta, on the Rio Grande, is the old church built before 1635, and tradition has it that here lies the body of the warrior priest Joan de Padilla who came with Coronado to Zuni, and then with Tovar to the Hopis, and showed such zeal in the conversion of the Indians of the country that he penetrated far to the north and east and there was slain as a martyr to the cause he loved. Writing with appreciative affection of this noble padre, Mr. J. Riordan thus states the tradition hold by the Indians in regard to his body: 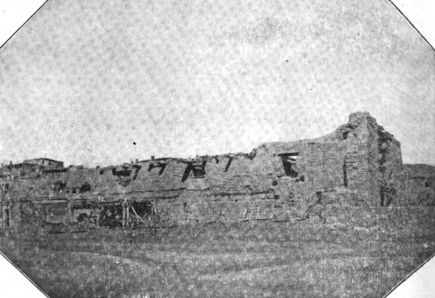 “Years after his death, in October, 1599, another Spaniard, Oñate, with a band of soldiers and two Franciscan priests, ventured toward the land of Quivira, the priests to search for the body of their martyred brother. It is said that it was brought back and the Indians of Isleta, thirteen miles south of Albuquerque, have a tradition which persists to the present day that the sacred remains of Padilla rest beneath the chapel of their pueblo, and they firmly maintain that at regular intervals of about 25 year’s the incorrupt body in its cottonwood casket rises to the surface from the depth of the grave. This phenomenon, if it be not a miracle, is said to have occurred no later than about five years ago, and one old Indian of the pueblo asserts that he has twice witnessed the resurrection.  The Indians, it is said, expect this phenomenon as stated periods, and prepare themselves for the event, and after its occurrence they reverently return their treasure to its resting place with all the solemnities of the church.  However this may be, it is true that Padilla’s life was a real miracle.  Fearless, kindly, self sacrificing, resourceful, this Andalusian priest was a fit prototype as he was a proto-martyr of the Catholic Church in the United States.” [1]A committee of ecclesiastics and laymen appointed by the Archbishop of Santa Fe some years ago discredited the miraculous character of this resurrection. The facts, however, are historical, that … Continue reading 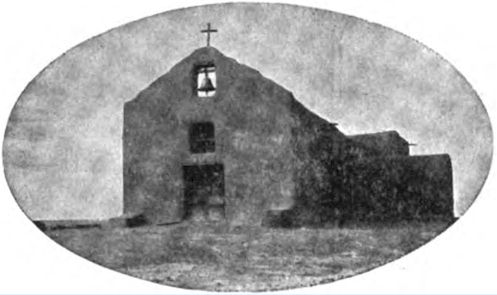 Laguna, 68 miles west of Albuquerque, (according to Lummis) was founded July 4th, 1699, largely by refugees from Acoma, Sia and Cochiti. Later on a few Zuni families settled there. The people are of the Queres stock and their lives and religion are very similar to those of the people of Acoma and cognate pueblos. 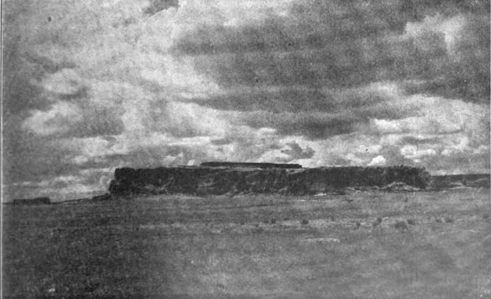 The Crag of Acoma

The Mission Church of Laguna was undoubtedly built in the 1700’s as we find that in 1708 Fray Antonio Miranda was established there. It is of adobe, with a quaint little belfry, or campanile, crowning the fachada, the whole surmounted by the cross. The sacristy is built out from the main building, in front, and there is an adjoining two-story terraced adobe structure on the other side, which was undoubtedly used as the priest’s house in early mission days. The yard is walled in and was probably intended for interments. [2]The Pueblo of Laguna is now a visita or station of Gallup, New Mexico. From here one of the Fathers attends to the spiritual wants of the pueblo and outlying summer villages of the Indians. The … Continue reading 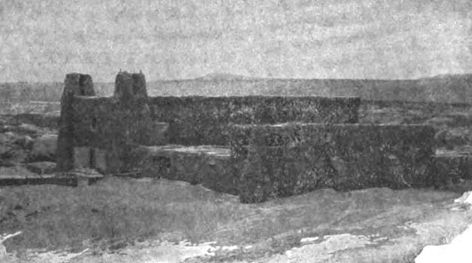 Nowhere in the wide world is there a more fascinating building than the Mission Church of Acoma. The original church was founded here about 1640 by Fray Juan Ramirez, of the order of Franciscans, who walked the weary journey from Santa Fe, tired with zeal for the salvation of these brave and warlike Indians. He was not welcome to the Aromas, for to them he was a representative of that race that had fought bloody battles with them and reduced their once proud leaders to humble submission. They greeted the messenger of the Prince of Peace with a storm of arrows, for they had already learned that the followers of Christ, or the nations that professed his religion of brotherhood, were not willing to accept brotherhood except on terms of their own dictation.

In 1680 Acoma joined the other pueblos of New Mexico in the patriotic endeavor to rid the country of the hated Spaniard. This pueblo uprising was led by a turbulent spirit, named Pope, and that he was a keen minded general is evidenced by the fact that, though his plans were betrayed and his hand forced, he was able to call upon followers eight days earlier than he expected, and yet the “rebellion” was successful, from the Indians’ standpoint. Four hundred Mexican Colonists and a score of Franciscan Missionaries were slain and the few that escaped were fiercely driven from the country. All New Mexico, from Taos on the north to El Paso on the south, from Hopi land on the west to Santo Domingo on the east was s pattered with Spanish blood, and it is possible that not a Caucasian soul would have escaped had it n ot been for the pitiful warning of one faithful Indian who could not see his white friends ruthlessly murdered.

At Acoma the faithful priest, Fray Lucas Maldonado, lost his life. The Acomas say they thrust him from the fearful heights upon the rocky mass below, and where his grave is no man knoweth to this day. Then tired with their hatred for everything Spanish they ransacked the church, burnt the priceless records, the priestly garments, altar paraphernalia, books and furniture and then razed the laboriously built church to the ground.