For twelve years they then lived, free from all Spanish control, proud in their freedom, yet, doubtless, constantly in dread, even as they were in Zuni and the other pueblos, of the coming of the Spaniards to wreak vengeance. In 1692 came Don Diego de Vargas, re-conqueror the second, and he and his two hundred soldiers gained the speedy submission of Acoma. But as before, it was merely a submission of words, for four years later the sturdy patriots revolted again, and when de Vargas came in anger to storm the rock, they jeered at him from above and defied him to overcome them. This de Vargas was unable to do, and their revolt never was punished, for, a few years later, seeing all the other pueblos brought under control without bloodshed they voluntarily submitted themselves and warfare between Acoma and the Spaniards was at an end. 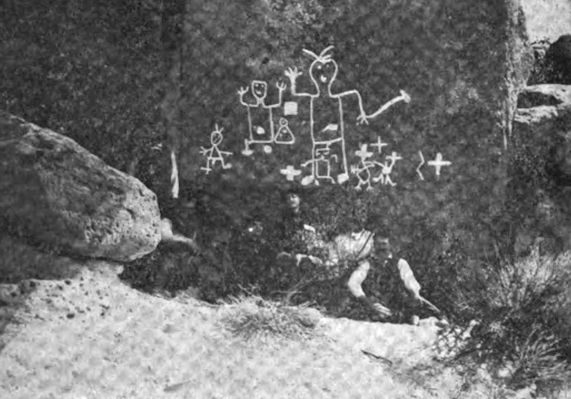 Then it was that the church was rebuilt, about the year 1700, as we now find it. Its walls are sixty feet high and ten feet through at the base and the rafters are fourteen inches square and forty feet long, dragged by the main strength of human beings, harnessed to them with rawhide riatas after they had been felled in the mountains twenty miles away. Look at the great churchyard. It is nearly two hundred feet square, and the wall at the outer edge is forty feet high. This was filled up blanket-ful by blanket-ful, by patient women, who tirelessly climbed up and down those steep cliffs carrying the needful earth from the valley below. Dr Lummis asserts that there is no modern cathedral in the United States that occupies as much space as this noble church and its outbuildings.5 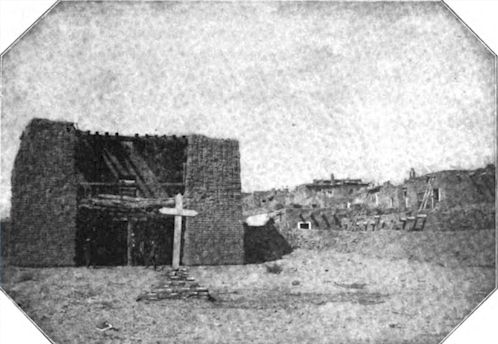 Front View of Church at Zuni

Zuni is another of the quaint pueblos of New Mexico. It was made familiar to the American public by the graphic and intimate descriptions of Lieutenant F.H Cushing. It was about the year 1629 that Benavides, the Franciscan apostle of New Mexico, sent Padre Francisco Letrado to Zuni to establish a mission there. This martyred priest came to New Mexico the year previously and was first sent to minister to the Jumanos, a race of tattooed savages that lived on the plains east of the Rio Grande. In 1630, doubtless urged by the native shamans or priests to get rid of this hated outsider who taught anew religion, Letrado was killed. On El Moro, Inscription Rock, we read an interesting inscription with reference to this deed. Translated it signifies: They passed on the 23rd of March in the year 1632 to the avenging of the death of Padre Letrado.”

When the Spaniards arrived they found that the Zunis had removed bodily to the summit of Tai-yo-al-a-ni, a gloriously majestic mesa, several hundred feet high, some three miles away. Here they were safe, for the summit could be reached only by precipitous trails which one man could defend, provided with heavy rocks to tumble down upon an advancing foe, no matter how many they might number. Thomas de Aibizu, in charge of the expedition, was a diplomat, for he persuaded the Zunis to leave the heights, return to their village, and on pledge of future good behavior, he forgave them.

It must have been soon after this time that the Mission Church was built, for in 1680 on the ill-fated 10th of August, Zuni participated in the general uprising and three Missionaries, Padre Lorenzo Analiza, Juan de Jesus Espinosa and Sebastian Calsada were slain and their bodies buried in the church.

In 1692 Don Diego de Vargas was sent from Mexico, by the Viceroy, to reconquer New Mexico. In due time he reached Zuni. As before the Zunians had retreated to the summit of Tai-yo-al-a-ni, but de Vargas sent a friendly Indian informing them that if they would come down, and peacefully submit, he would not punish them for their past transgressions. They did so and on the 11th of November offered 294 children to be baptized.

At the same time the Governor, according to the Documentos para la historia de Mexico, was invited to a Zuni house “where he saw an altar with two tallow candles burning on it. The altar was partly screened with pieces of church vestments. Kneeling down de Vargas removed the small crucifixes, two of brass and one painted on wood, a picture of St John the Baptist, a silver gold plated ciborium, a monstrance with its rock crystal, and four silver chalices with only three patens.

There appeared also several books which had been used by the priests who died there at the time of the great revolt. These objects were taken by the governor in order to transmit them to the Custodian of the province. There remained two bells without hammers in the, power of the Zunis.”

The census of 1789 credited Zuni with a population of 2,437 Indians hut no Spaniards. The Zunis never have taken kindly to the Catholic or any other faith than their own and for many years the old Mission has been allowed slowly to go to ruin.6

In 1618, Fray Geronimo de Zarate Salmeron was parish priest at Jemez. He mastered the Jemez language and baptized 6,566 Indians not counting those of Sia and Santa Ana. His account of “the things that have been seen and known in New Mexico, as well by sea as by land, from the year 1538 till that of 1626,” was written to induce other missionaries to enter the field in which he was so earnest a laborer. This chronicle was translated by Mr C. F. Lummis and appeared in The Land of Sunshine.7 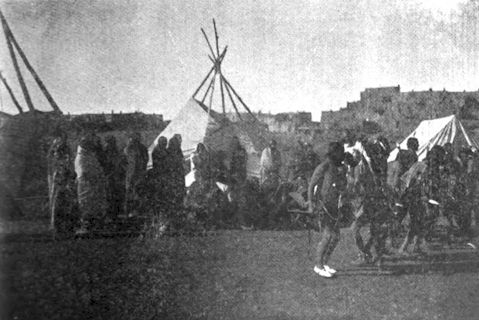 Dance of the Taos Indians