The new Kingdom of St. Francis in our Southwest comprises at present 56,000 square miles, a territory as large as the State of Illinois. Our 8 parishes number 1200 Americans, living in 13 different towns and settlements; 800 Croatians in 4 mining camps; 11,000 Mexicans, in 64 towns, villages and ranchitos; 3 tribes of Pueblo Indians, living on 9 reservations, in 20 different villages and numbering 6,670 souls; the Jicarilla Apache Indians, numbering 878; and the Navajo Indians, numbering 23,000; a total of 8 parishes, 101 towns and villages and mines and settlements and two large reservations of nomadic Indian tribes : 53,748 people ( about one person to the square mile ), attended by 23 Franciscan Fathers of the Cincinnati Province.

Coming home some time ago, tired and weary, from a ride of almost 40 miles on the back of my faithful Frank horse, the experience of my first ride on horseback arose vividly before my mind.

In those regions of Arizona, to which steam and electricity have not yet penetrated, and where one, consequently, is dependent upon the horse for transportation from place to place, it is of some importance to be more or less proficient in the equestrian art.

Accordingly, after I had been but a few days in this rapid-transitless country, I was taken out to receive my first lessons in riding horseback. A big sorrel horse was selected for this purpose. He was not a thoroughbred, with velvet nozzle, flaring nostrils, silken skin, eyes of liquid fire, and hoofs like cups of agate. His mane did not flutter in the breeze like the banneret of a victorious hero, nor did his neck have the graceful curve of the rainbow. Ben Hur would never have run down Messala with a span like him. He was short-winded, and for this reason a government inspector condemned him, and the fact that he once belonged to Uncle Sam was responsible for his being called Sam. There was nothing about poor old Sam, since died in his harness, to excite the artistic instincts of poet, sculptor or painter; he was simply a condemned government horse and had been sold at public auction. 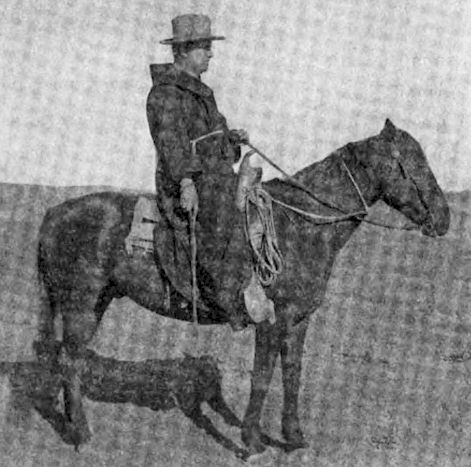 Sam on this occasion was rigged up in a California cowboy saddle, with high cantle and horn. The good points of the saddle were explained to me, as also some of the fine points of riding. Trotting, I was told, was not only jarring on the human system, but also unpleasant for the sensitive part of human nature. But loping, that was the ideal gait. I finally got the impression, that loping a horse in a saddle like that, was like sitting in a rocking chair with a spring cushion seat, inflated rockers, and self-adjusting back and foot rest.

After learning this much of the theory of riding, I was told to mount and put it to a practical test. Supposing that mounting a horse required an extra energetic effort, I came near going over on the other side of the horse, but succeeded in landing in the saddle with more grace than I gave myself credit for, although the bystanders were wearing some queer looking smiles, and if I remember rightly, were nudging one another.

Having mounted, my troubles began. I did not find the saddle as immovable and rigid as I expected. In consequence of this, I pretty soon thought myself slipping down on the right side of the horse. In attempting to gain my supposedly lost balance, this feeling was transferred to the left side and finally, a sensation of slipping down on both sides at the same time had developed. I remember having had a similar sensation many years ago, when as a small boy, I attempted to walk on the top of a fence. But the result of that acrobatic attempt is another story.

The next thing to be done was to get the horse into motion. I gave out the customary smacks, gave the steed a dig in the left flank with the heel and a touch with the quirt on the right, and wound up with a stern “get up”; Sam “got up” and made straight for the barn door. If I did not wish to be brushed off, and perhaps have my neck broken, something had to be done, and pretty quick, too. I knew that horses, when driven, were guided with reins, so I pulled at the right rein, but Sam did not mind it and held his course with what I then considered a fiendish obstinacy, towards the barn door. I then tried the left rein with the same effect, or rather miss-effect. After this I see-sawed the reins with the result that the horse stopped, threw up his head and began to prance about, which maneuvers I found extremely uncomfortable. I now addressed my much amused audience with the words: “What’s the matter with the old beast; he doesn’t mind any of the reins?” And was then told: “Lead him with both reins”. This reminded me of the fact that Sam was an old U. S. cavalry horse, which was trained to being led with both reins. In this way the horse can easily be managed with the left hand, while the right hand remains free for other work.

So I led him with both reins, and behold, there was no difficulty whatever. After we, my riding teacher on a fleet footed Navajo pony, and myself on one of Uncle Sam’s war-garrons, got out into the road, we left the horses walk for quite a stretch. This was easy enough. But after a while my companion said: “Now let us trot” and touching the flanks of his Navajo pony with his heels, the skittish little brute set off on a trot, and my Sam followed suit. I clutched the horn of the saddle with both hands, and went along at a bouncing rate. If there was a miserable being in this vale of tears and sorrow at that time, and one who was a sight to see and to be remembered he was bouncing and dangling about on Sam’s back. My teacher now turned back and asked with a pleasant smile: “How are you getting along?” and I answered in a staccato, the only tempo, in which I was able to speak just then, and with a misfit attempt at being pleasant: “Oh not so bad; only this saddle is awful hard.”’ Whether he was proud of his pupil or not, I do not know; at least, I do not remember his having made any remarks in that direction. The next number on the program was now announced: “Now we will lope.”‘ Ah! thinks I, that’s good; now comes the rocking-chair business.” He touched his Navajo pony with his quirt, and off he went on a lope, and after him goes my Sam. Sam got to make about four leaps. At the first leap I flew up in the saddle with suddenness and a violence that made me think I had struck the ceiling of the firmament with my head. At the second leap I came down into the saddle with all the compressing feelings of a telescope, my teeth came together with a clash that I thought the antipodes must have heard it, and myriads of beautiful fiery and golden sparks danced in merry gyrations before my eyes. At the third leap the whole atmosphere roundabout and above, was tilled with flying fragments of rocking-chairs, roller coasters, merry-go-rounds, and Ferris wheels. All seemed to be smiling, although I cannot explain how that was possible. At the fourth leap Sam came to a sudden stop; for by that time I had pulled on the reins till his ears almost touched my chest, in the meantime shouting: “Whoa” much louder than necessary.

I turned my steed’s head barnwards and walked him home, muttering the while: “Pshaw, rocking-chairs, racking-chairs would be more like it.” Pretty soon my riding master rode up and in a disgusted tone of voice said, “You’ll never learn to ride!” to which I had nothing more to answer than: “That’s all right, I know when I got enough anyway, and there is lots of wisdom in that. Remember the little poem with the refrain: “Try, try again?” “Let’s act upon it some other day.”