Beauty and utility crowd each other closely in the Pecos Valley of New Mexico, and Roswell, as the central feature of this remarkable section, is a splendid illustration of the development of the great American desert.

It should be remembered that in a state which has a history running back for hundreds of years, the Pecos Valley is comparatively a newly settled section. Fenced off by a range of mountains, it did not attract the attention of the conquistadores, and the cross of the early Fathers was not raised over its peaceful slopes, simply because it was un-peopled save by occasional parties of Indians who came to fish in the Pecos River and the Bottomless Lakes, and to hunt buffalo and antelope upon the Llano Estacado or Staked Plains, then thought to be a hopeless waste.

It was not until 1860 that the first white settlers came to the Pecos Valley and engaged in both agriculture and stock raising. They found a few Mexican communities along the Rio Hondo, in what is now Chaves and Lincoln counties, and they had been but recently established, coming, according to the records of the Church, from Las Cruces and other settlements along the Rio Grande and south of Socorro.

There has since that time been one of the most wonderful transformations that the world knows.

Nor did it come all at once. For 20 years stock raising was the only occupation, and, in spite of its complete isolation, it thrived splendidly, the native grasses being abundant, and the whole slope lying outside the depredatory zones of both Comanche and Apache. The nearest railroad was at Las Vegas, nearly 200 miles away, and at Abilene, Texas, still further away. The cattle were driven overland to Dodge City, Kansas, for the most part, and the practice continued until the Fort Worth and Denver crossed the Panhandle in 1879.

The first house was built in Roswell in 1872, and the place shortly attained considerable importance as a trading point for a region larger than many states of the Union. By the influence of Captain J. C. Lea, the first “leading citizen,” it was given a post office in 1875 and the name Roswell was bestowed upon it in honor of one Roswell P. Smith who built the first house mentioned.

In the meantime the elements had been forming for the creation of the great farming and fruit country we now behold. The greatest step forward was the discovery of artesian water, which was to open up the greatest artesian field in the world. This occurred in March 1891, on the premises of Hon. Nathan Jaffa, in Roswell, who in drilling for potable water struck the flowing strata which has since made the valley famous. That was a modest little well, reaching only the first of the three stratas and flowing about 300 gallons a minute, but it started the tide of immigration this way, since it pointed to the development of a vast acreage of fine land that could not be reached by the usual gravity acequias fed from the streams which, by the way, are undoubtedly of artesian origin, the vast springs at their heads being merely breaks in the roof of the water strata.

The development of the valley progressed rapidly after that. Today the artesian field extends from twelve miles north of Roswell to Lakewood, in Eddy County, a distance of 95 miles and is as much as twelve miles wide at places. In this field there are now over a thousand wells, each flowing up to 2,500 gallons a minute, of water that is organically pure, containing only 95 parts of harmless mineral solids to the 100,000. Over 25,000 acres have been reclaimed from the desert in Chaves County alone, and the end is not nearly reached. At all points the water flows, providing the place is lower than the head of North Spring River at Roswell, and above that level the water is easily accessible to pumpage, which has reclaimed some 12,000 acres more. 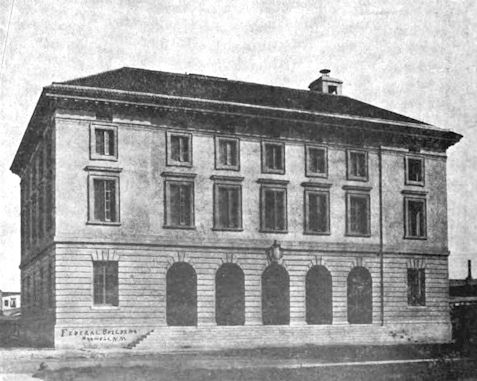 In the meantime, the railroad had built up from Pecos City, Texas, to Carlsbad, and in 1896 it reached Roswell. The town then really began to grow, and it received an added impetus two years later when it was completed through to Amarillo, Texas, by M. J. J. Hagerman, two years later becoming an integral part of the great Santa Fe system. The expansion of the country continued to be steady. Encouraged by the splendid fruit grown on the pioneer ranch of the Chisums at South Spring Station, orchards began to be planted. There were then no pests of any sort whatever. Each year the acreage of apples has increased until there are today 15,000 acres of bearing orchards in Chaves Co. with probably as much again in process of growth. In 1913 450 cars of apples were shipped out to the eastern and northern markets, bringing a total return of a little over $500,000. Owing to the distance from markets and the absence of means of utilizing windfalls and culls, the greater part of these was lost to commercial use.

Apple growing is not now the easy thing that it once was. The codling moth and the aphis followed the railroad’s coming, and today require stringent corrective laws to be held in check. However, the thing is well understood, and the organization under proper state laws is complete. This year more than 80 per cent of the apples raised in Chaves County were marketable, and were marketed.

Alfalfa shared with apples the honor of being the first of the money crops, and it forms to-day one of the most important of the money producers. In 1913 4,500 cars of alfalfa were shipped from the country, from Roswell to Carlsbad inclusive, and including some 300 cars of alfalfa meal, now becoming a commercial factor. It is estimated that there are 25,000 acres of alfalfa within this compass of territory, and more is constantly being sown. The great legume here grows four and occasionally five crops in a year, and the water supply is so far amply sufficient to keep it thrifty.

Of late years much has been done in the way of truck growing, as for example in the matter of cantaloupes of which there were this year shipped from Roswell about 100 carloads, netting in the neighborhood of $400. per car.

In speaking of the development of the valley from an agricultural and horticultural standpoint, it should be noted that we speak entirely of the irrigated section. In eastern and northern Chaves county and eastern Eddy county, there are many thousands of acres of so-called “dry farms,” and a population of several thousand people, who make their living from regular farming, depending upon the rainfall. However, it is generally conceded that irrigation must be the road to the highest and only permanent prosperity, since it means a uniformity of crops impossible with dependence upon rainfall, especially in a semi-arid country such as this. Much of the plains referred to is underlaid with pure water at an easy pumping depth, and the soil being extremely rich, its development is only a matter of time. 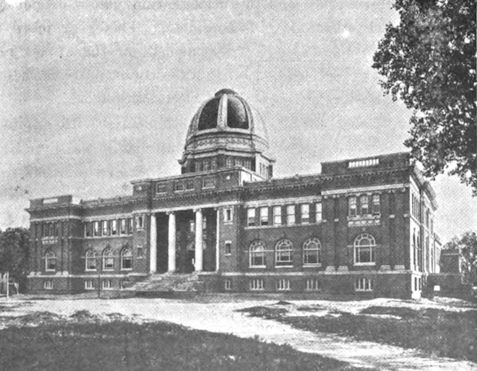 The government, it should also be remarked, recognized the fertility of the valley at an early date. In fact, the first project under the reclamation service is located at Carlsbad, and centers a region of infinite promise, though that is outside the scope of this article which has to do with the Roswell-Artesia section. The second of the projects of the reclamation service is the Hondo reservoir, ten miles west of Roswell, with which it was projected to irrigate some 6,000 acres, but which has not been operated, owing to unusual climatic conditions since its construction, and which are now being remedied by the construction of a concrete conduit to catch the waters of the upper Hondo, which are now lost in the gravels of the foothills.

Sheep and cattle have from the first been the great revenue producers of the valley, and they have not lost their eminence, though, owing to the rapid settlement of the country, the open range has been considerably reduced. There are some 325,000 head of sheep in Chaves County, and two million pounds of wool were marketed here in 1913. The cattle shipments aggregated $196,000 and that of sheep, (including those “trailed” out), was about $100,000. These latter figures are not a usual average, as both were held down by the conditions in both the cattle and sheep industry.

In the meantime, Roswell continued to grow, until we behold today a population of about 8,000 in the city proper, of which 95 per cent are Americans, and the balance Mexicans. The city has a municipally owned water plant, that cost $120,000, a sewer system that required more than that much more, telephones, electric lights supplied from a system that cost $250,000 and which furnishes many thousands of horse power to the irrigation pumps over a large area around Roswell, a court house that cost $160,000, a federal building that required about $130,000, a public school system that required nearly $100,000, and four banks doing a business of over $3,000,000 a year. 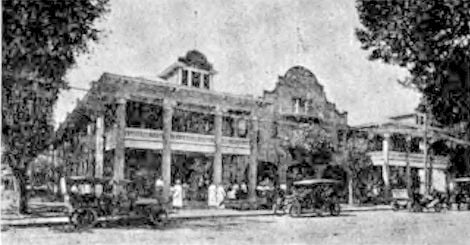