But now it was high time for me to be off for Santo Domingo and the Mexican Mission of Domingo where I was also expected today. I took leave of my parishioners and mounted my faithful bronco, held in readiness at the church door. At first rather wild and unmanageable, it is a Navajo pony, it soon became gentle as a lamb. Cautiously it stepped over the new iron bridge, carefully lifting its legs, lest it stumble over the shadow of the rail-posts, cast by the light of the moon.

It was, indeed, a beautiful night. The vast expanse of the heavens seemed to be studded with countless sparkling emeralds of the starry firmament like so many lights on an immense Christmas tree. And over it all the full-faced moon looked tranquilly upon the earth. All was peaceful, solemn and quiet. “Silent night, Sacred Night.” Shepherds sleep, yet what light floats around the holy pair,” I was humming to myself, when as to give the lie to my words, a passenger train whizzed by right close to me. At such an unpardonable disturbance during this holy night my Indian pony became somewhat excited and began to trot a little faster; but soon he fell to his usual gait, and I could resume my musings. 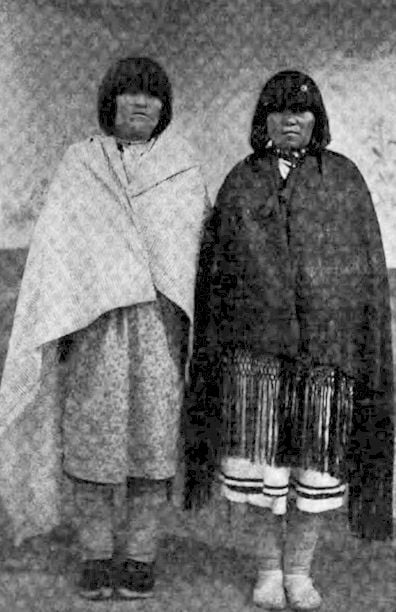 So even on Christmas night the world knew no rest, during the Noche-buena, passengers were en route! And of these, how many were really aware of the true meaning of this holy night? Did it enter into the mind of anyone to raise his heart to God and breathe, a prayer of thanksgiving for the grace of the Incarnation and Redemption? Was anyone so mindful as to send a greeting to the Divine Infant present in so many tabernacles throughout the world? “He came into his own, and his own received him not.” Whose heart possessed that peace announced by the angels: “Peace on earth to men of good will?” It is the Lord, Who sees into the heart, “Who trieth the hearts and reins.” And then, whither were they bound? What was the end of their journey? True, sooner or later they will land on the shores of eternity: but their immediate journey, where did it take them? Perhaps to some good friend? Or into the bosom of a loving family? Or into the arms of a dearly loved mother? Or, perhaps, into the cherished circle of peaceful brothers and sisters! 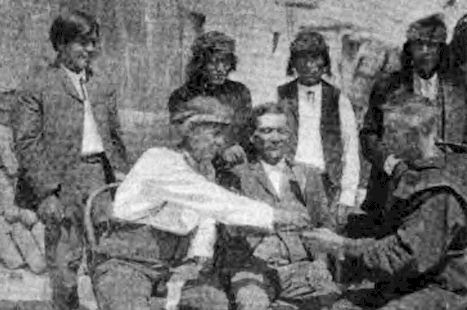 And then someone was mentally carried back some 17 years. It was on the other side of the “great brook” where on this same night five brothers and sisters had gathered in a poor but well kept little home. Circumstances had scattered them to various parts of the world: ever since the death of their parents, one was living here, the other there. Once again the sacred feast of Christmas had united them. Joyfully they gathered around the small Christmas tree prepared by the eldest brother. “Ecce quam bonum et jucundum, habitare fratres in unum.” “Behold how good and how pleasant it is for brethren to dwell together in unity.” And again they parted. This time it was the Lord Himself Who called. They shook hands for the last time, in the hope of meeting again in heaven. With tear-dimmed eyes the loving sister gazed after her brother who was hastening away, until the train had disappeared in the nearby tunnel. Lost in such reveries time slipped by very quickly. The distance of about 9 miles had been covered, and I was back again at Santo Domingo. Just then the cock began to crow. Very appropriate! for the Missa del gallo was now to be celebrated. It might have been 5:30 A.M. I entered the sacristy where the air was quite close. About a dozen Indians, who had been watching through the night, were lying at full length around the hearth. Their eyes were heavy; but I knew an excellent means to revive them. I threw some candy among the sleepers and presently all were on their feet. “Christmas! Christmas!” they cried in unison. Everyone was wide awake. The fire was thoroughly stirred ami, of course, tobacco had to be passed around, for haame is indispensable, and if tontoech should ever forget it, they would not hesitate to call his attention to it. The warmth of the fire soon restored my stiffened limbs. In a corner I spied a pallet and a thick Navajo blanket. There I tried to rest for a few minutes, if possible. But I had scarcely closed my eyes, when I was suddenly aroused. The beat of a drum reached my ear, interrupted by the discordant notes of the false trumpet, and the shrill sound of the pipe. To judge by the “music” they were going to the war dance. But no, this time they were peaceful Indians, for here, too, the words “Peace on earth to men of good will” hold good.

The Indians of Santo Domingo are very much like children and noise is an essential feature of every celebration. The greater the din, the greater the solemnity.

So the dancers had already put in their appearance! I arose, and walked into the church to view the spectacle they presented. A piebold picture indeed! Despite the cold the Indians were clothed very sparingly, but painted all the more gaudily. The sight before me would have given any photographer the itch to secure that picture, but let him take care! In Santo Domingo photographs may not be taken save at the risk of having your camera smashed.

I withdrew to the sacristy to prepare for my second Mass. Soon both divisions had performed their feat and done homage to the Divine Infant, and I could begin the Holy Sacrifice. The good sacristan assisted as well or as poorly as he knew how. Holding a book before him, generally upside down, and ceremoniously moving his lips, he presented no doubt, an imposing figure. At any rate, he contributes his share to the solemnity of the occasion by adding to the din. Thus at every genefluxions he rings the bell, and on feast-days during elevation the altar bell, the church bell, the drum, trumpet and pipe unite in grandest discord. But in the course of time a person grows accustomed to it. Such demeanor in church may seem undignified and even desecrating to civilized whites, still, who can tell but what many a native, thus giving expression to his joy and intending to honor God. stands higher in God’s estimation than the educated white man. Indeed, God looks into our hearts.

At the sermon I noticed a rather large attendance. The fiscal had engaged someone to stand guard at the church door, lest anyone should leave too soon, and several times during Mass I heard the audible challenge of the janitor: Heizonarshro? (Whither?)

As at Sun Felipe, so also at San Domingo young and old, wrapped in their blankets, squatted on the bare ground. After Mass the whole congregation chanted several times the “Hail Mary” in Spanish, and the Doxology, sung with might and main, brought the solemnity to a fitting close.

A few children were now baptized in the sacristy, and my day’s work was finished here. The sun was quite high, as I took leave of my parishioners, and my pony soon carried me to Domingo, 2-3 miles away, where I was to say my third Mass.

This is by no means an exhaustive description of the Christmas celebration at San Felipe and Santo Domingo. What impressions its perusal may have made upon my readers, I cannot surmise; however, I hope they were good ones, such as may possibly result in some material assistance. At any rate, an Ave said now and then, for the complete enlightenment of our red brother the Indian will surely not be asking too much.

And now God bless you, and good-by until some other time.

Just as we go to press we read in the America [Dec. 28. 1(112] as follows, The Rev. Wm. H. Ketcham, Director of the Bureau of Catholic Indian Missions, has received the following letter from ids Excellency the Apostolic Delegate:

The glory of the Church in America is her Indian mission record, which is written in the blood of her martyrs; and yet today in the United States, a land of plenty, the Indian missions are languishing for want of adequate financial support.

That in Christianizing and civilizing the Indians the mission school is an absolute necessary factor is evinced not only by the nature of the work itself, but by the positive testimony, without exception, of all the bishops and missionaries who are charged with them. The cry of distress from these bishops and missionaries has reached us; they must be enabled properly to acquit themselves of the sacred responsibility laid upon them by Almighty God and by his Church.

The somewhat meager Lenten Collection, which is divided among a number of works of zeal, affords but a scant annual contribution toward maintaining the schools, and it is to the Bureau of Catholic Indian Missions, which, for nearly thirty years, has bravely and quite successfully fought the battles of the Indians and of the Missions, that the schools look for subsistence.

This Bureau has had the sympathy and hearty support of my illustrious predecessors, and I am determined to encourage it, and to sustain it in all its good works. The efforts of the Bureau to collect the requisite financial aid for the schools culminated in the establishing, in 1901, of the Society for the Preservation of the Faith among Indian Children. This Society is in every way feasible, and with due encouragement of all the bishops, will solve the whole Indian mission problem.

Our Holy Father, Pope Pius X, addressed an Apostolic Letter, April 3, 1908, to His Eminence, James Cardinal Gibbons, in which he commends the Preservation Society to the bishops, to the clergy, and to the faithful of the United States of America, and expresses the wish that this Society “be established in every parish.” Whenever this recommendation of the Holy leather is to any considerable extent complied with Catholic Indian mission work will have ample support.

I bless the Society and all who promote it, and it is my desire that the Holy Father’s wish be realized with the least possible delay.

With earnest wishes, therefore, for much success in this work, I am

Rev. Dear Father Anselm: I heartily approve your commendable venture of publishing the ” Franciscan Missions of the, Southwest” for the benefit of our Indian Missions, expressing, at the same time, my earnest wish that our Rev. Confreres and the Faithful in their charge give the Preservation Society and its new annual their zealous support.