Twenty-six miles southeast of our Mission at St. Michael’s is situated the flourishing city of Gallup with a population of about 3000. It is surrounded by a number of coal mines, and forms one of the main divisions of the Santa Fe Railroad. Situated between the Navajo and Zuni Indian Reservations, Gallup has numerous wholesale houses, which supply the Indian traders on the reservations. Gallup is in the Mexican village of Cebolleta, 110 miles away, to Gallup. For 18 years Father Juillard had labored zealously and successfully in this extensive and difficult parish. When he accepted the position of Assistant Director of the Society for the Propagation of the Faith with headquarters in New York City, 3 years ago, the Most Rev. Archbishop of Santa Fe requested the Franciscan Fathers of the fact the business center for the entire surrounding country within a radius of 100 miles and more.

The Catholic population of the city of Gallup numbers about 400 families, of which about 150 are Mexican, the balance consisting of American, German, French, Italian and other nationalities. About 20 years ago, Rev. G. J. Juillard transferred his pastoral residence from Cincinnati Province to take charge of the parish. Rev. Florentine Meyers was appointed pastor; the Rev. Fathers Robert Kalt and Rembert Kowalski are his assistants.

The parish had indeed a church and pastoral residence, built of adobe, but no, school. As Catholic schools are very necessary everywhere, especially here in the southwest, Fr. Florentine began shortly after his arrival in Gallup to make arrangements for the erection of a new school. Despite lack of money and despite many other difficulties the school is already an established fact. The school is built of dressed stone and adobe and three stories high, comprising five light, well ventilated class-rooms, and 25 other apartments for the Sisters and boarders. 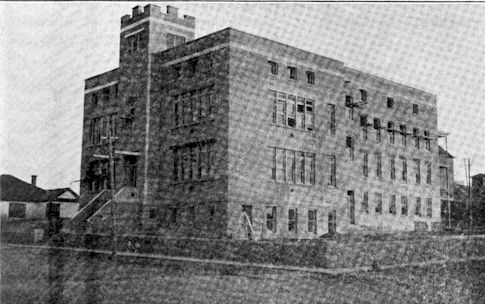 On the 28th of Nov. 1912 the school was dedicated by the Most Rev. J. B. Pitaval, Archbishop of Santa Fe. A large number of both secular and regular clergy attended the imposing ceremony. The Franciscan Sisters of the Perpetual Adoration, of Lafayette, Indiana, who also conduct schools in Roswell, Pella Blanca and Jemez, N. M., have already arrived in Gallup and opened the school on the 13th of January, this year.

The new schoolhouse is the largest and handsomest building in Gallup, the pride of the city, and an eloquent testimony to the spirit of sacrifice of the congregation, and to the zeal and spirit of enterprise of their beloved pastor.

Fr. Florentine’s activity does not confine itself to the city of Gallup; at stated intervals he visits the Mexican village of Atarque, 80 miles away, with a population of 40 families; San Lorenzo; 15 miles from Gallup, with 20 families; the 400 Mexicans and Americans who are employed in the sawmills of the distant Zuni mountains, and the 1751 Zuni Indians living in the four pueblos of the Zuni Reservation, 40 miles away, whilst Fr. Rembert attends to the spiritual needs of perhaps a thousand Catholics, mostly Croatians, who are engaged in the coal mines near Gallup, and Fr. Robert administers to those in the far-away Mexican and Indian villages east of Gallup.

The parish comprises an area of 11,000 square miles and numbers aside from the 300 American, English, Italian, etc. families and the 800 Slovenians, 21 Mexican villages and settlements with 4220 Mexican inhabitants and 14 Indian villages inhabited by 4163 Pueblo Indians. I have not mentioned the 5527 Navajo Indians, who live within the confines of this parish, as they practically belong to St. Michael’s Mission.

Although the three Fathers connected with the parish at Gallup are doing their very best, nevertheless, all these widely separated places cannot be cared for as they should. That is physically impossible. More priests and more schools are necessary, not to mention the wherewithal.

The education of the children offers the greatest difficulty. Gallup has now, indeed, a Catholic school, and Mexicans of the well-to-do class, living in distant villages, will send their children as boarders to this school. But the large Mexican villages belonging to this parish are without a Catholic school. On the other hand, in these very Mexican villages there are no less than five Protestant Mission Schools, ably conducted by competent teachers. Please note! All these schools are among our Catholic Mexicans, and were established for these Catholics to lead them out of Romish idolatry into the bright light of the Gospel!

Naturally these mission schools are being opposed by our Fathers. In the impoverished and badly administered counties the school funds are so meager, that the public schools can be conducted for only a few months in the year, and, at times, incompetent teachers are employed, whilst the Protestant schools are also free schools, supported by Protestant missionary societies; in point of secular training these schools are good, as they have competent American teachers. In order to quiet the consciences of the Mexicans, the Protestants maintain that these schools are not protestant, but non- sectarian. Try to persuade a Mexican not to send his children to the Protestant school, and he will answer, in that case his children would have to grow up without any education. And he will put the counter question: “Why don’t you give us Catholic Schools, as the Protestants have given us Protestant schools?”

New Mexico is considered a Catholic state, but the Protestants say that it is an entirely neglected missionary field; that they must take up and bear the burden of caring for the education of the Mexicans, since it is, evidently, too heavy for our shoulders. When shall we be in a position to have Catholic schools in these villages? Then, not a Mexican would send his children to a Protestant school.

But who are the Mexicans? They are the descendants of the first Spanish settlers of the Southwest; generally the descendants of Spaniards and Indians. They inherited from the Spaniards their friendly, dignified deportment, generous hospitality, and solid Catholic faith; from their Indian ancestry they probably inherited their fickleness and carefree disposition.

Although the Mexicans do a little farming, stock raising is their main industry. Aside from localities, where irrigation is possible, the southwest is only adapted for stock raising. The condition of the country is such that people must live in widely separated localities. Some Mexicans are well-to-do, a few are even wealthy, but the vast majority are herders and live from hand to mouth.

In their isolated villages Spanish is spoken almost exclusively; very few understand English. Recently I heard a famous lawyer holding forth in a court of justice; he begged for kind consideration if his speech should halt, as this was the first time he spoke without an interpreter; for once the entire jury understood English. That the pastoral charge of such a race in such a country is connected with unusual and great difficulties, is very apparent.

And the 4,163 Catholic Pueblo Indians who belong to this parish? Of these perhaps some other time.