In crossing the Navajo Reservation, years ago, I had passed over the mountain range the first day, and the second day I had been riding all blessed day over the barren, dry and dreary desert, when, upon reaching the high bluffs of the river, the beautiful San Juan Valley lay of a sudden before my astonished gaze. Instinctively the old Patriarch Lot, viewing the banks of the Jordan, came to my mind, of whom Scripture tells us: “And Lot lifting up his eyes saw all the country about the Jordan which was watered throughout before the Lord destroyed Sodom and Gomorrah, as the paradise of the Lord, and like Egypt as one comes to Segor.” True, the valley of the Jordan was watered naturally, whilst the San Juan Valley is irrigated artificially, forming one long line of blooming gardens, flourishing farms, and fruit orchards. The orchards thrive here especially, hence this valley was fittingly named the Fruit Belt and the Mormon town east of Jewett is called Fruitland.

In the middle of this valley lies Farmington, easily the largest and most beautiful town of the entire San Juan County. Although situated on an elevation, and some distance north of the San Juan River, Farmington is surrounded by farms and gardens irrigated by the clear waters of the Las Animas flowing in countless ditches through the whole town.

Rising in the snow-clad La Plata Mountains of Colorado the Las Animas first flows through Durango, Colorado, thence for 63 miles in a southwesterly direction through a fertile valley, until it pours its waters into the San Juan River directly east of Farmington. The La Plata River, not quite as large as the Las Animas, also rises in the La Plata Mountains and unites with the San Juan three miles west of Farmington. Lying at the confluence of these rivers, where the cultivated valleys and bottom lands of these three streams unite in wide expanse, Farmington seemingly has prospects of a brilliant future.

Thirteen years ago the whole San Juan County was visited once a year from the distant Park View, N. M. Later, Rev. Father Garnier, was made pastor of the county and took up his residence at Blanco, a Mexican village on the San Juan River, 28 miles east of Farmington. When finally a railroad was built from Durango, Colorado, to Farmington, New Mexico, Father Gamier erected a chapel at Farmington to which a few rooms were added to serve as a temporary residence for himself whenever he visited Farmington.

In the year 1910 this parish was accepted by the Franciscans of the Cincinnati Province. The parish comprises the whole San Juan County and the western half of Rio Arriba County measuring 70 miles from north to south, from east to west 125 miles, and having within its confines 400 Mexican families, scattered over this vast stretch of 8750 square miles, living in their isolated villages, settlements and ranches. Fr. Albert Daeger, O. F. M., was transferred from the pastoral charge of Pena Blanca to that of Farmington. Fr. Fintan Zumbahlen, O. F. M., became his first assistant. Last year Fr. Felician Sandfort, O. F. M., was sent as second assistant to Farmington.

As some mission stations could be more conveniently reached by rail from Farmington than from Blanco, the Fathers chose Farmington for their residence, although it contains but 10 Catholic families. Since conditions at Farmington were such as to make a Catholic school imperative. Father Fintan used one of the small rooms in the rear of the church as a class room and taught the children himself. He frequently acts in the capacity of pastor, schoolteacher and cook.

Blanco is the largest mission, as it has 80 Mexican families. Its adobe church with mud roof is by far too small for the congregation. A few rooms adjoining the church serve as pastoral residence. On the first and third Sunday of each month religious services are held, the Sacraments administered and the children instructed. Here, too, a school is a crying need. From Blanco to the boundary of Colorado along the San Juan River are the villages of Alcatraz. Gubernador, Martinez, Rosa and Caracas, each numbering from 10-40 Catholic families. All have their small churches and chapels where religious services are held once a month, generally on a week day. Rosa alone is visited twice a month as it has 40 Catholic families. Lumberton, another mission of Farmington, has 50 families. It lies on the Denver and Rio Grande Railroad, and Edith and Monero are easily reached from it. The new chapel at Monero is approaching completion.

Four miles west of Lumberton there is an agency and Government school for the Jicarilla Apache Indians, who number about 700. Their reservation, too forms part of the parish of Farmington. Another Government school for the Apache Indian children is situated 20 miles southwest of Lumberton, where Father Albert has held services several times and administered Baptism to 13 Apache Indians. The Jicarilla Apaches are nearly all pagans. It is the earnest wish of Father Albert to see Lumberton become an independent parish, with a school and pastoral residence. This would be all the more desirable as the surrounding settlements and villages and especially the Government schools, the agency and the entire reservation of the Apache Indians could receive the spiritual benefits of frequent visits from the, priest. The Jicarilla Apaches, formerly fierce and warlike, are favorably disposed towards our holy religion and could soon be gained for our Holy Faith. The children at the Government school, too, would receive regular instructions if the Fathers resided at Lumberton. In addition to the Jicarilla Apache there are 2700 Navajo Indians within the confines of the parish of Farmington. Heretofore it was simply impossible to do anything for these Indians. 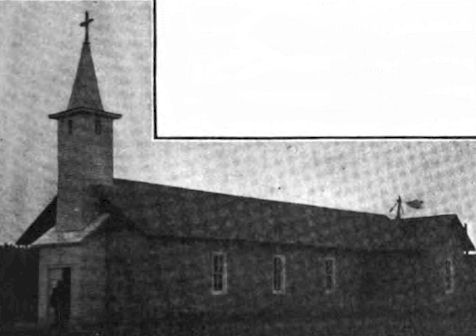 Altogether 15 Mexican villages belong to this parish. Most of them can be visited only a few times a year. Five villages have neither church nor chapel, and services are held in stores or in school buildings or in private houses. Very few villages have really suitable church-buildings. Some have adobe roofs, one has no roof at all, quite a few have adobe floors. Some can indeed be reached by rail, but even by rail it requires two days to reach Lumberton from Farmington. As these missions are so widely scattered, their spiritual care, requires almost continuous driving or riding. Thus, at one time Father Albert was at home but eleven days in five months! Since most of these villages are situated on rivers, some of them cannot be visited for months, because at certain times of the year it is impossible to ford these torrents.

But time brings many changes. Whilst, until 1909 the parish of Farmington was visited once or twice a year by a priest, later it had practically a resident priest for ten years. Now even three Fathers are actually engaged in administering to the spiritual needs of this extensive parish. With God’s grace and the assistance of generous friends there is founded hope that soon flourishing parishes, schools and Indian Missions will dot the San Juan and Kio Arriba Counties. We also trust that zealous Catholics will help settle the promising, fertile valley of the San Juan.