In 1901 the Society for the Preservation of the Faith among Indian children, now commonly known as The Preservation Society, was established by the Bureau of Catholic Indian Missions, at Washington, D. C, and in 1902 the Indian Sentinel, its official organ, was published for the first time. As it was, however, often scarcely possible for the Catholic Indian Bureau to raise even sufficient funds for the Missions and schools which are entirely dependent upon it for their maintenance, our own Mission could not hope for material assistance from this Bureau which itself is struggling for the very existence of its many schools. We therefor suggested the establishment of a Branch Society, mainly in the parishes of our Franciscan Province of Cincinnati, Ohio, and other neighboring parishes, for the maintenance of our own Indian Missions in Arizona and New Mexico. This proposition having been approved by the Director, the Rev William H Ketcham, and sanctioned by the Most Reverend Archbishops who constitute the Bureau of Catholic Indian Missions, our Branch Society was established in 1907.

Until this year the Indian Sentinel, the official organ of the general Preservation Society, was sent to the members of our Branch Society, but, having obtained the consent of the Reverend Director of the Catholic Indian Bureau, we have decided to publish, instead, The Franciscan Missions of the Southwest. This new publication will henceforth be the official organ for the Franciscan Branch of the Preservation Society. The Society remains the same now as before with all its manifold spiritual advantages, and with the central direction of the Bureau of Catholic Indian Missions at Washington, D. C. However, instead of the Indian Sentinel, the members of the Preservation Society will be supplied with the Franciscan Missions.

There were good reasons for abandoning the Indian Sentinel and starting a distinctly Franciscan publication for the Franciscan Branch of the Society. This was, above all, urged by many friends of the labors of the Franciscans in the Southwest who felt that the Indian Sentinel, covering as it does the entire Indian missionary field, could not be expected to go into details on the grand work done in the Southwest by the early Franciscans. Likewise now that the old “Kingdom of Saint Francis” has been revived and his sons of the present day have given new life and vigor to this kingdom, a special record should be given of their labors. Obviously that can more readily be done in a distinctly Franciscan publication. The members of the Franciscan Branch of the Preservation Society will no doubt welcome a change which brings them in direct touch with the work they have faithfully fostered in the past, and which no doubt will enjoy their continued support in the future.

In appearance and general makeup, too, we have decided upon a departure from the central organ of the Society, in a word, we have added an advertising section to the magazine. The Indians of the Southwest, particularly the Navajo, are not the lazy lot of humanity as which our American Indians in general are pictured to us. On the contrary, a glance at the advertising section shows flourishing business establishments, in the interior of the Navajo country as well as on its borders, whose constituents are almost exclusively Navajo Indians, and who all were eager to avail themselves of the opportunity offered them to advertise. Consequently we “advertise our advertisers” first of all to knock a silly notion in the head “that our Southwestern Indians ought to go to work. They do, and they keep pretty many traders “a’going.” Then we are glad to advertise the products of our Indians; blankets, baskets, pottery, silverware, none of which they need be ashamed of, and all of which are worthwhile advertising. Finally, too, because of these products we are often approached in the matter of giving addresses and information as to where these articles may be had. Such of our readers we can now refer to the advertising section. It is, however, only fair that in writing to advertisers you mention “The Franciscan Mission.”

Our Branch Society now numbers about 5,000 members or more, a fact which gives the magazine a good start. With the advent of the new magazine we are quite confident that the Society will receive a new impetus. Already many encouraging letters from the Reverend Pastors have reached us which bespeak a hearty welcome for the Franciscan Missions, so that, in addition to gaining for the Franciscan Mission Work in the Southwest that consideration which it deserves, the magazine will undoubtedly also largely contribute towards a healthier financial condition of the missions.

Some have also subscribed in advance, which leads us to call the attention of the Promoters of the Society to the fact that many persons who are not members of our Branch Society will undoubtedly desire the magazine. While the spiritual advantages of the Society are large as compared with the small fee of twenty-five cents, and it therefor remains desirable to enroll as many members as possible, it is equally true that a large number of persons especially friends among non Catholics Will ask for the magazine without desiring to be enrolled as members of the Preservation Society.

In such cases we do not hesitate to dispose of the magazine, as the magazine is not intended exclusively for members of the Preservation Society, but for all who may be interested. Indeed, we take this occasion to ask our Promoters to give the magazine as wide a circulation as possible among their friends.

The best way to make our Missions and the laborers therein known is, we believe, through the publication of this magazine. The propaganda for a keener interest in Catholic Missions in general is no doubt being stirred up through specializing this interest, of which our magazine is only another instance. The needs of our Indian Missions should not always continue to be known only to God and the missionaries laboring in them. Let our Promoters, then, continue their good work of the past, and renew their efforts for a wide circulation of The Franciscan Missions Of The Southwest. 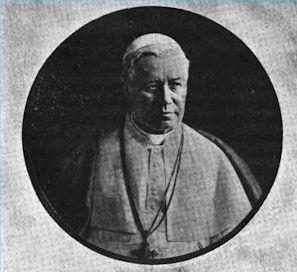 Rev. Anselm Webee, O.F.M.
Kneeling at the feet of Your Holiness, humbly begs to rant him the
Apostolic Benediction for himself. The Franciscan Missionaries of
the Cincinnati Province working in New Mexico and Arizona, for
the 31,000 Indians under their care and for the good Sisters
devoted to their education.
10 June 1911

1 thought on “Introduction, Old Missions of New Mexico and Arizona”