Cortez had conquered Mexico; Pizarro was conquered in Peru; Balboa had discovered the South Sea (the Pacific Ocean) and all Spain was aflame with gold lust. Narvaez in great pomp and ceremony, with six hindered soldiers of fortune many of them of good families and high social station, in his five specially built vessels sailed to gain fame, fortune and the fountain of perpetual youth in what we now call Florida.

Disaster, destruction, death, I had almost said entire annihilation, followed him and scarce allowed his expedition to land, ere it swallowed him up, so that had it not been for the escape of Cabeza de Vaca, his treasurer, and a few others who escaped, there would have been nothing left to suggest that the history of the start of the expedition was any other than a myth. But de Vaca and his companions escaped, and sometimes worshipped as demi-gods, making a great medicine, both cases keeping them from their heart’s desire, they never once eased in their determined efforts to cross the Island (as the American Continent was then supposed to be) to reach the Spanish Settlements on the other side. For eight long years the weary march Westward continued until, at length, the Spanish soldiers of the Viceroy of New Spain were startled to seeing man who were almost skeletons clad in the rudest aboriginal garb, yet speaking the purest Castilian and demanding in the tones of those used to command and be obeyed that they be taken to his noble and magnificent Viceroyship. Amazement, incredulity, surprise gave way to congratulations and rejoicing when it was found that these were the human drift of the expedition of which not a whisper, not an echo, had been heard for eight long years. And then curiosity came rushing in like a flood. Had they seen anything on the journey? Were there any cities, any people worth conquering; especially did any of them have a wealth in gold, silver and precious stones like that harvested by Cortez and Pizarro?

De Vaca did not really know but ____, and his long pause and brief story of seven cities that he had heard of, one or two days’ journey to the North of his track fired the imagination of the Viceroy and his soldiers of fortune. To be sure though, they sent out a party of reconnaissance, under the control of a good father of the Church, Fray Marcos de Niza, of the Order of Friars Minor, with Stephen, a Negro, one of the escaped party of Cabeza de Vaca, as a guide.

Fray Marcos penetrated as far as Zuni, and found there the seven cities, wonderful and strange, though he did not enter them, as the uncurbed amorous demands of Stephen had led to his death and Fray Marcos feared lest a like fate befall himself, but he returned and gave a fairly accurate account of what he saw, which was not at all misleading, except in its pauses and in what he did not tell. But those pauses and eloquent silences were easily overcome by the vivid imagination of what the Conquistadores desired, so a grand and glorious expedition was planned, to go forth with great sound of trumpets, in glad acclaim and glowing colors, led by his Superior Excellency and Most Nobly Glorious Potentate Señor Don Francisco Vasquez de Coronado, a native of Salamanca, Spain, and now governor of the Mexican province of New Galicia.

The reports of Marcos de Niza had fired the hearts of zealous priests as vigorously as they had excited the cupidity of the Conquistadores. Four Franciscan priests, Marcos de Niza, Antonio Victoria, Juan de Padilla, and Juan de la Cruz, together with a lay brother, Luis de Escalona, accompanied Coronado on his expedition. On the third day out Fray Antonio Victoria broke his leg, hence was compelled to return, and Fray Marcos speedily left the expedition when Zuni was reached and nothing was found to satisfy the cupidity of the Spaniards. He was finally permitted to retire to Mexico and there died March 25th, 1558. [1]James Mooney, Indian Missions North of Mexico, (Washington, 1907) says: “On the return of the expedition in 1542 three of the (original five) Franciscans volunteered to remain behind for the … Continue reading

The second church in what is now United States territory was founded in New Mexico in September 1598, by ten missionaries who accompanied Juan de Onate, the real Colonizer of this new country. It was in 1595 that he made a contract with the Viceroy of New Spain to colonize it at his own expense. He was delayed, however, and could not set out until 1597, when he started, early in the year, with four hundred colonists, including two hundred soldiers, with women and children and great herds of cattle and flocks of sheep. In due time he reached what is now the village of Chamita, a few miles north of Santa Fe, and there established in September, 1598, the first town of New Mexico, and the second of the United States, (St Augustine, in Florida, having been the first, established in 1560 by Aviles de Menendez). 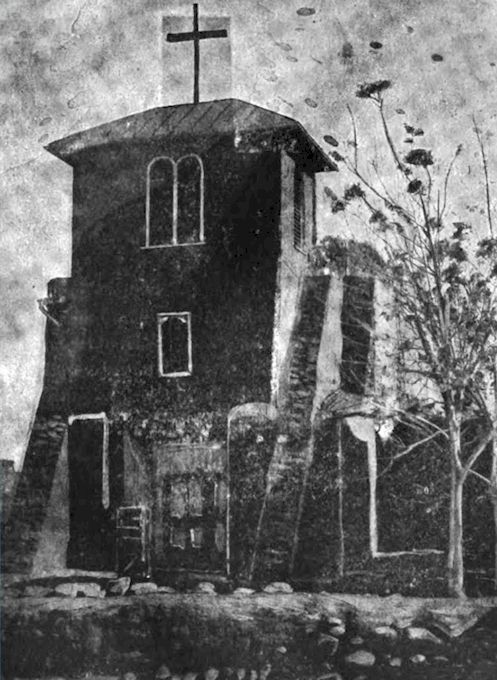 A chapel was built at San Gabriel but no fragment of it now remains, though in 1680 its ruins were referred to. The second church in New Mexico was built about 1606 in Santa Fe, the new city founded the year before by Oñate. This church, however, did not last long, for it was soon outgrown, and in 1622, Fray Alonso de Benavides, the Franciscan historian of New Mexico, laid the foundation of the parish church which was completed in 1627. When in 1870 it was decided to build the stone cathedral in Santa Fe, this old church was demolished except two large chapels and the old sanctuary. It had been described in the official records shortly prior to its demolition as follows: “An adobe building 54 yards long by 9½ in width, with two small towers not provided with crosses, one containing two bells and the other empty; the church being covered with the Crucero (the place where a church takes the form of a cross by the side chapels), are two large separate chapels, the one on the North side dedicated to “Our Lady of the Rosary “called also” La Conquistadorea; and on the South side the other dedicated to St Joseph.”

Sometime shortly after 1636 the old church of San Miguel was built in Santa Fe and its original walls still form a part of the church that stands today. It was partially demolished in the rebellion of 1680, but was restored in 1710.